When to say goodbye to a pet 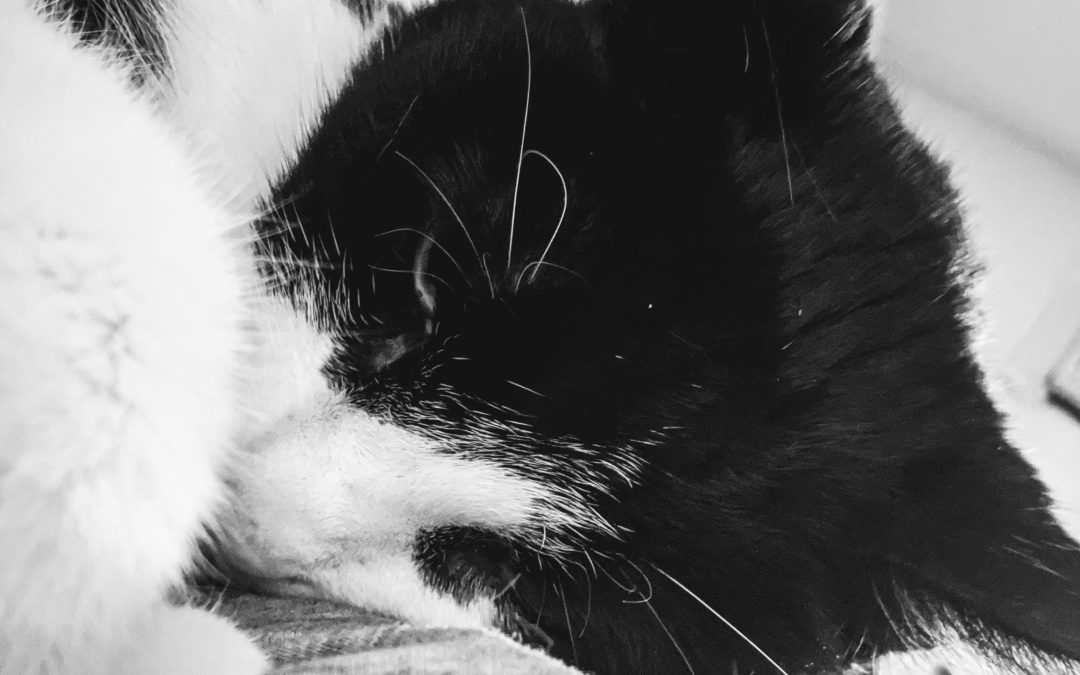 I grew up not really knowing what it’s like to have anything other than a bird or a fish in the house. My parents, who both grew up on farms, didn’t want us to have cats or dogs. I asked my mom once why she was never keen on it and she told me that losing them is just too hard. Also, she’s a bit of a clean freak, so I don’t think claws and fur are really her thing. I never intended to get cats when I was older, until I lived in an apartment and there were mice. The measures the landlord had taken to control them weren’t working, so I figured, I’ll get a cat.

In 2003, I adopted two rescue kittens. The one I named Jazz used to hiss at everything that moved, including his brother (who I named Whisper). Jazz and Whisper took care of the mouse problem and I fell in love with their company. Whisper used to sleep on my head and eventually, ended up running the household. He was the clown cat, the one that got into everything and kept my guests amused with his crazy antics. Jazz, on the other hand, was the quiet one. He was reserved and if Whisper wasn’t around, he’d come into my arms for cuddles. I named him Jazz because he purred like Wynton Marsalis’ trumpet. They were part-Siamese – true hunters and talkers.

They say that kittens who stay with the same owner into adulthood tend to adopt some of the personality traits of their human. I would say that Whisper was my creative side and Jazz was my quiet side. They moved around with me, from Sudbury to Ottawa, Ottawa to Montreal, Montreal to Ottawa. In 2017, Whisper’s nostrils were constantly flaring and he let out a few big cries when using the litter box. Something was wrong. He’d been losing weight for a while, I figured that was normal at his age. He was 14 at the time. I called in a vet, we did xrays and the little bugger had so much fluid in his lungs that the vet couldn’t even see his heart. I chose to euthanize Whisper on my 40th birthday. The vet had told me that I could bring him home, and he could live with medication for a few months. I couldn’t – I didn’t want him to suffer and I knew it was time.

Fast forward to 2020. Jazz and I have been living alone now for three years. I went through some serious medical issues in 2018 and he was there with me. He’s always been there. He was the perfect artist cat, the one who’d let me work quietly and come to him for cuddles later on. But that changed in the past year or so. He started crying all the time, getting confused, wondering where I was (even if I was right next to him). His back legs aren’t so solid anymore and he too has lost a lot of weight. He throws up every second day, he whines all night, he barely eats. It’s not just old age – it’s what I call “pre-end-of-life”. In other words, it’s time.

The mistake I’d made with Whisper was that I didn’t pay enough attention to the symptoms. Ironically, Whisper became very vocal in his adulthood (he was a very quiet kitten). So, I figured he was just being himself. But when Jazz started yowling out of the blue, I realized that no, this is something else. I never took my cats to the vet, not since they were kittens. And I’ve talked to vets and they’ve all told me that it’s really not necessary (though I’m sure they wouldn’t publicly say so). If they appear to be healthy, it’s fine to forgo yearly visits.

Of course now, I struggle with a bit of guilt. Maybe Jazz’s thyroid is off. Maybe he’s got diabetes. Maybe it’s his kidneys. I’ll never know. Because I’ve chosen to euthanize him without knowing. He is 17 years old. In the end, I don’t feel it’s worth diagnosing and medicating a cat who so obviously looks at me with eyes that say “mom, I’m tired”.

I had initially planned to do this at the end of February. But, ironically, on the day of my 43rd birthday, I looked at him and started crying. I knew I had to do it sooner. He was shivering for some reason. He hadn’t really eaten all day. Ugh, I just knew. And the worst part of it all, is that he probably could continue to live without too much suffering for a few months, maybe another year. But, it’s hard with cats – you don’t really know they’re in pain until they’re VERY much in pain.

I read a post from a vet recently where she said that in all her years of practice, she’d never had anyone euthanize their pet too early. But, she had seen a lot of cases where it had been too late. When should you say goodbye to a pet? When it becomes clear that their quality of life isn’t great. I could have prolonged his life – but I would have done it for me. Because I hate the thought of losing him. But if I were in his body, I’d want to go now, too.

Pets, I believe, are sometimes more meaningful to us than other humans. They don’t judge us, they don’t care about anything other than being fed, being loved, being made to feel safe. And they give us tremendous love in return. It’s no wonder it’s so hard to let go. It’s a soulful connection that we may never experience again. I think that if you feel that it’s time, even if you wish it wasn’t so, then it’s ok to let go. The vet won’t judge you, your peers don’t need to know the details, and your friends and family don’t have a say in it. It’s your pet, and it’s your call. And letting them go a little early is a very compassionate thing to do. It’s much better than letting go too late.

Jazz is scheduled to be euthanized tomorrow, Thursday Feb 6th, 2020. I’m gonna go spend the night watching tv with him, in my arms, like we’ve done almost every night for the past seventeen years. Thanks Jazz, you’ve been the best quiet companion I’ve ever had.